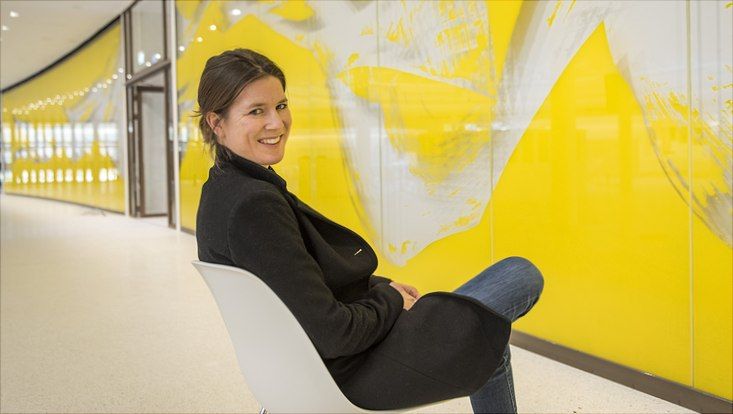 Schirin Kretschmann’s work oscillates between painting-as-installation art and its liminal convergences with process-based practices, interrelating scientific cognitive and research processes with the act of painting and interpreting this itself as aesthetic research.

She studied Fine Arts at the State Academy of Fine Arts Karlsruhe and at the ENPEG La Esmeralda, Mexico City as well as German Philology at the University of Freiburg. She has realized public art projects as well as presentations in international galleries and institutions (Kunstmuseum Stuttgart, Kunstverein Hannover, Museum für konkrete Kunst Ingolstadt, Bündner Kunstmuseum Chur/CH, Kunsthaus Baselland/CH, Tianjin Academy of Fine Arts/VRC, Kunstverein Freiburg, Kunstverein Salzburg,et al.) and has received many awards (German National Academic Foundation, Kunststiftung Baden-Wuerttemberg, Stiftung Kunstfonds, PhD scholarship from the Swiss National Science Foundation et al.). In artistic and curatorial research projects (Praeparat Bergsturz, Bern University of the Arts, six notes for the next… Magazin4, Bregenz Kunstverein) she was working on transdisciplinary methods of knowledge and iconic research. She is doing an artistic PhD and researching on Liminals of Painting in the Three Dimensional Space (NCCR Iconic Criticism, University of Basel and Bauhaus-University Weimar). Since 2020 she is professor of painting at the Academy of Fine Arts Munich.

My artistic work is situational and processual in that it takes an artistic gesture as a point of departure and initiates developments or fluctuating processes, in which the viewers themselves usually play an active role and perception is understood to be a multifaceted, synaesthetic, constantly changing and thus unfinished process. The intervention of a material in a specific exhibition context is always a direct reaction to the conditions of the respective context and its material components.

The material used takes hold of the respective supporting surface (wall, ceiling, floor, glass pane) or bonds with it, depending on and according to the respective physical conditions (temperature, position, surface structure). In addition, the open surfaces of the material accumulate interventions of the visitors and things like dust particles, insects and pollen that usually remain invisible. As if the artwork were a detector, it captures such coincidental traces, thus manifesting the silent materiality of time.

The four-week research period in the context of the CAS “Imaginaria of Force,” University of Hamburg served to examine the interrelation between my own artistic work and its various situational effects. In the text project that was realized, the experiences of pre-existent work processes were compiled.