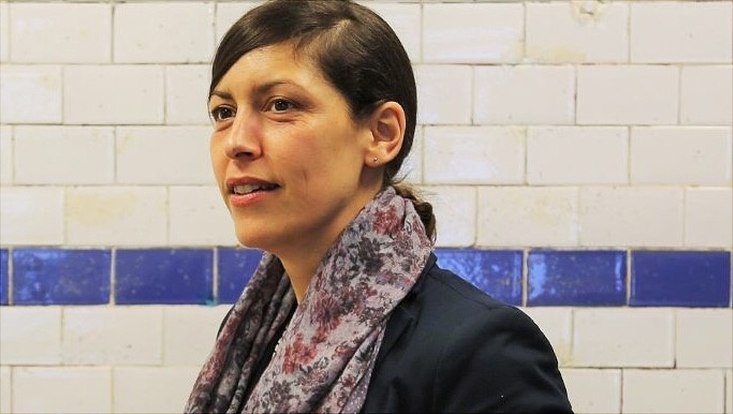 Nassima Sahraoui is a philosopher based in Frankfurt, Germany. She studied Philosophy, Political Sciences and Sociology, as well as a few semester history and art history at Goethe University Frankfurt. She received her doctoral degree in philosophy for a thesis on the notion of dynamis (potentiality, faculty, force).

She was a fellow at the CAS Imaginaria of Force at the University of Hamburg and at the Forschungsinstitut für Philosophie Hannover (fiph), and taught at Goethe University’s Comparative Literature Department as well as at the Institute for Social Work at Baden-Wuerttemberg Cooperative State University. Nassima Sahraoui also served as a coordinator and assistant for the doctoral programme at the University of Art and Design Offenbach and as editor for the S. Fischer publishing house.

Currently, she is publishing her book Dynamis. Eine materialistische Philosophie der Differenz (Bielefeld: Transcript, 2020; forthcoming), in which she deconstructs the notion of dynamis through several steps in the history of philosophy. She is also completing an interdisciplinary book project on Figures of Resistance.

Nassima Sahraoui is founding member of two international workshop series: one on the concept of Violence in Literature and Philosophy and one on Walter Benjamin’s Philosophy. She has cooperated closely with many research institutions and scholars. She is regularly invited to give talks on conferences and symposia all over the globe.

Apart from her work as an academic scholar, Nassima Sahraoui also works as a translator, editor, and moderator.

Research project: Figures of Resistance: Studies on a New Form of Political Praxis / Dynamis: Studies on a Materialist Philosophy of Differences

Figures of Resistance. Studies on a New Form of Political Praxis (working title)
Within the scope of my research project, I am providing a re-reading of the highly controversial as well as overdetermined notion of resistance. In crossing the interdisciplinary axis between the history of philosophical and political ideas and socio-economic, aesthetic, and literary-historical perspectives, I will demonstrate how this concept and its practices might function as a fruitful tool for a critical analysis of the current socio-political conditions of our world. My project crystallizes around the following questions: how is resistance possible at all? Can we extract specific concepts and practices of resistance through which moments of freedom and authenticity can be experienced? Are there other forms of life thinkable that lie beyond the economic dynamics and populistic tendencies of our given world?

To answer these questions, I exemplarily examine a selection of figures and forms that bear an immanent potential to resistance. They encompass a wide range of concepts and practices from traditional philosophical discourses on melancholy and otium to the aporias of time, space, and perception, from political and aesthetic debates on the relation between the community and the individual, on power, right, freedom, equality, and responsibility to artistic and political resistance movements and its literary narrations.

All of these concepts and practices contain – in one way or the other – an immanent potential of resistance whereby a withdrawal from the steady undertow of the political and economic time line, which absorbs the individual’s capabilities, might be possible. Hence, a thorough study of the notion of resistance might enable us to adjust our perception of the political and economic order and thus helps us to formulate a social critique that takes into account both, the relation between individual practices and the social totality as well as the historical processes and dynamics.

Dynamis – Studies on a Materialist Philosophy of Differences
Currently, I am furthermore completing a manuscript Dynamis. Eine materialistische Philosophie der Differenz (Dynamis. A Materialist Philosophy of Differences). The methodological focus of the book is interdisciplinary and covers the fields of political theory, the history of philosophy, philosophies of the 20th century, as well as comparative literature.

In a genealogical retrieval to Aristotle’s notion of dynamis (potentiality, force, faculty), I analyze the relational interval in which something turns from mere potentiality to actuality. Through a materialist and deconstructive reading of some of the leading 20th centuries philosophers – such as Martin Heidegger, Ernst Bloch, Jacques Derrida, or Giorgio Agamben –, I discuss how this interval or turn from potentiality to actuality might be actualised and included into a critical reading of current historico-political phenomena.

The actualization of this ancient concept derives from a deconstruction of important concepts and conceptions of the history of philosophical ideas, be it metaphysics, analogy, metaphor, or aporia. My book finally proves that this interval, in which the turn from potentiality to actuality takes place, bears a moment of freedom, which – read as such – could have an immediate influence on the ways in which we perceive and implement historical and political dynamics.