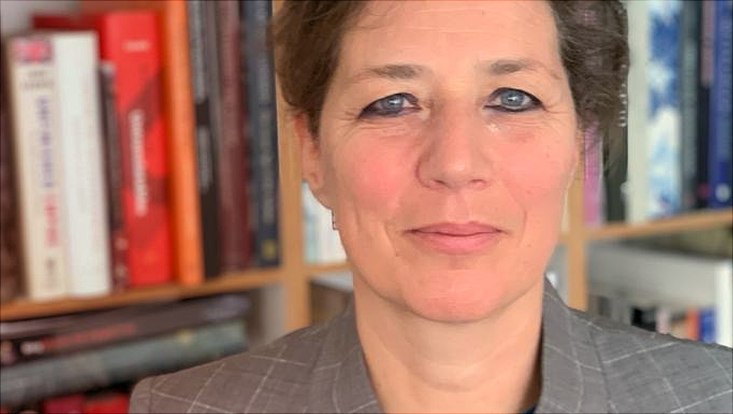 She studied art history, law and philosophy in Berlin and Vienna and received her PhD at the Freie Universität Berlin (2002). Before joining the Kunsthistorisches Institute in Florence in 2004, she was appointed by the Freie Universität Berlin (1995-2001) and  the Bibliotheca Hertziana in Rome, Max-Planck-Institute (2002-2003). Her doctoral research was supported by the Gerda-Henkel Foundation.

She was guest scholar at the Max-Planck-Institute for the History of Science in Berlin (2007), the Getty Research Institute in Los Angeles (2014 and 2016) and Visiting Professor at the University of Heidelberg at the Cluster of Excellence Asia and Europe in a Global Context (2017) and at the University of Zurich (2017).

She obtained major grants from the Getty Foundation for Art, Space and Mobility in Early Ages of Globalization, together with Avinoam Shalem and Gerhard Wolf (2010-2015). By the Federal Ministry of Education and Research she was funded for the Art Histories and Aesthetic Practices research program developed by her and Gerhard Wolf at the Forum Transregionale Studien Berlin (2013-2019).

She is head of the 4A_Lab in Berlin, a research and fellowship program of the Max-Planck Institute in Florence in cooperation with the Prussian Cultural Heritage Foundation.

Forthcoming publications include a monograph on The Iconology of the Sea in Early Modern Italy and Art and Ecology, edited with Sugata Ray and Gerhard Wolf (New York: De Gruyter, 2021).

In the European imagination, the sea represents an ambivalent space of vastness and distance, of departure, of the horizon and its shifts, of depth, abysses, reflection, but also of dynamic forces. Not only storms, but eddies emerge in both literary and pictorial renderings. As such, they are objects of research contributing to an understanding of Maritime History or Blue History from a humanities' perspective. The project investigates the forms of representation of maritime forces and dynamics in Early Modern Art of the Italian peninsula. For the completion of a book project, the focus of the research will be on two case studies: A medieval imperial insignia with maritime connotations from Sicily as well as a large-scale woodcut by Titian from 16th-century Venice. In both cases, spaces of imagination and agency are explored, but also their relationship is brought into tension.

In 1549, an otherwise unknown venetian Printmaker published a large-scale print by Titian. The piece must have been a re-edition of a lost first version, developed by the artist approximately thirty years earlier. The woodcut is covering a surface of 290 x 100 cm of paper and therefore has the size of a panel painting.

Spreading over 12 sheets of paper, Titian has represented the biblical theme of the crossing of the red sea, rendered in black and white. Titian has placed Moses and his people on a slope of land to the right. The patriarch and his companions – Aaron and perhaps Josua – are gazing back on their prosecutors, the pharaoh with his entourage, soldiers and horses, who are drowning in a turbulent sea of black ink.

As has been noticed, the main protagonist of Titians representation are the agitated waters, but the larger meaning of this observation has not been studied. During my virtual stay via Zoom at the CAS »Imaginaria of Force« I studied the print under a set of different aspects. Mainly, I looked at the print as condensed representation of different forces, those divine and those naturalized. The print unfolds a dynamic investigation into these powers, calibrated with high artistic skills on the surface of the paper sheets.

This study on Titian prepared at the CAS will be integrated into a larger history of the representations of the sea in Early Modernity in the Italian Peninsular. For this larger project, during the stay at the Kolleg I also investigated models of history writing, where force is used as a metaphor for historical change and dynamics.